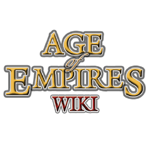 The Age of Empires Wiki is about the "Age of Empires" series, history-based, original real time strategy games published by Microsoft Game Studios. The wiki features information about all of the Age of Empire games and as its spin-off, Age…